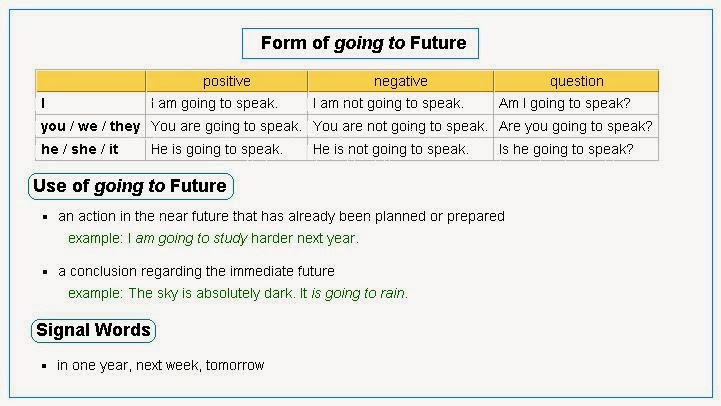 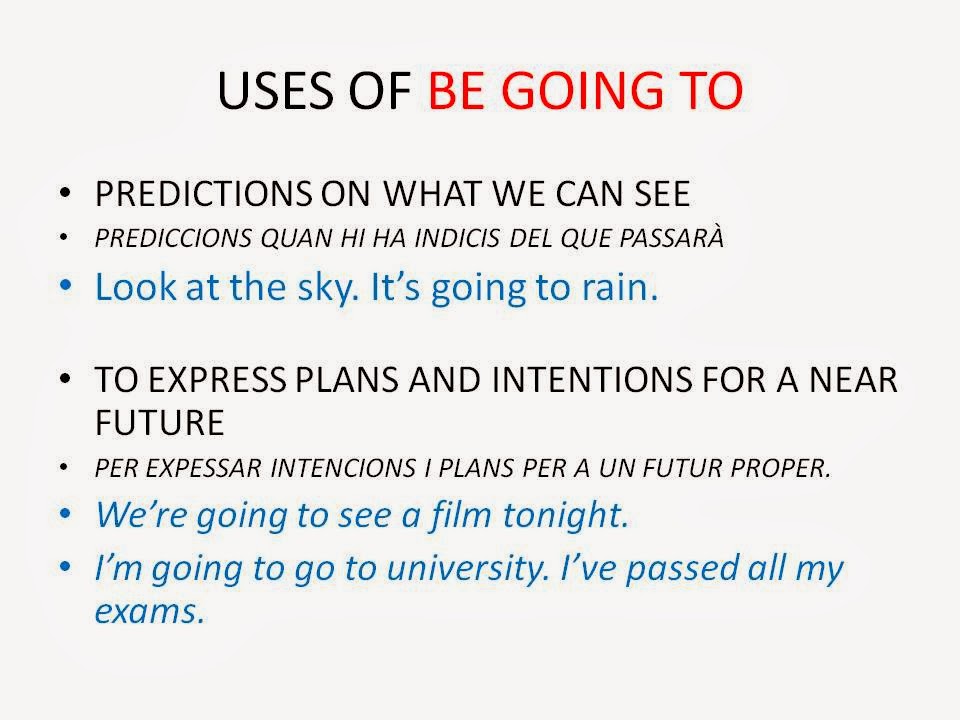 Etiquetas: be going to, future, WILL AND GOING TO

THE SIMPLE PAST TENSE

INTRODUCTION TO THE SIMPLE PAST TENSE 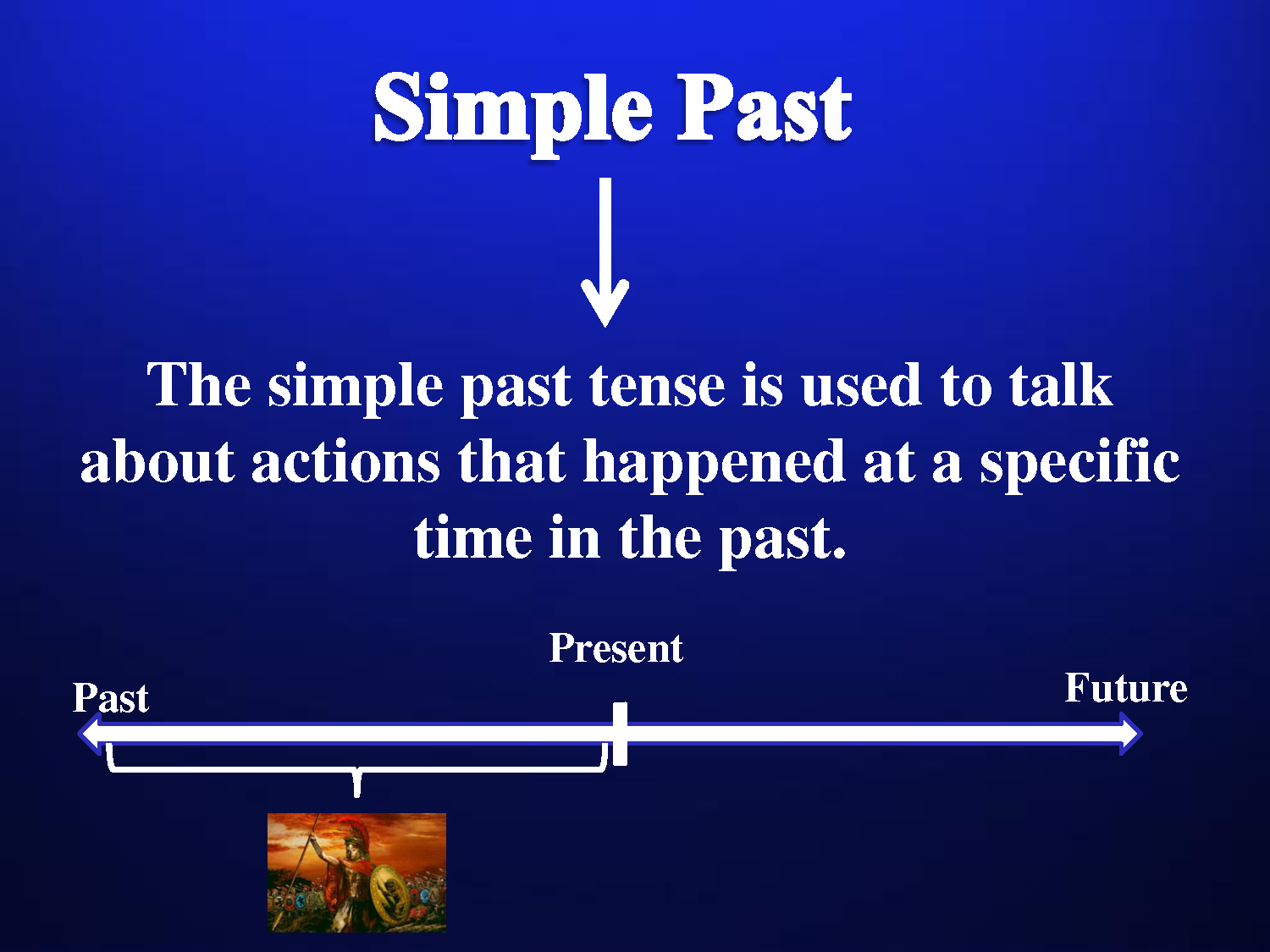 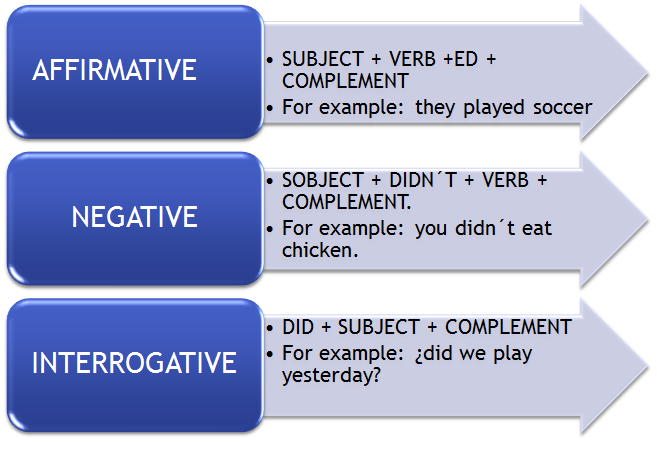 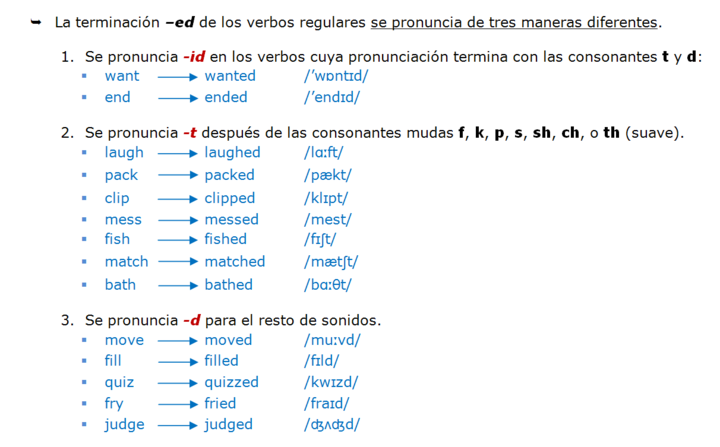 SIMPLE PAST : affirmative, negative and question 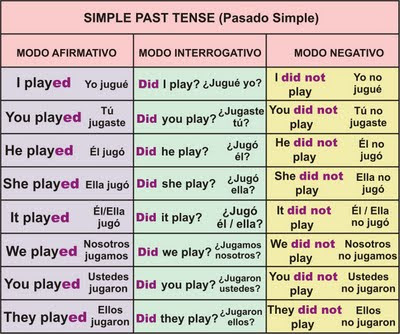 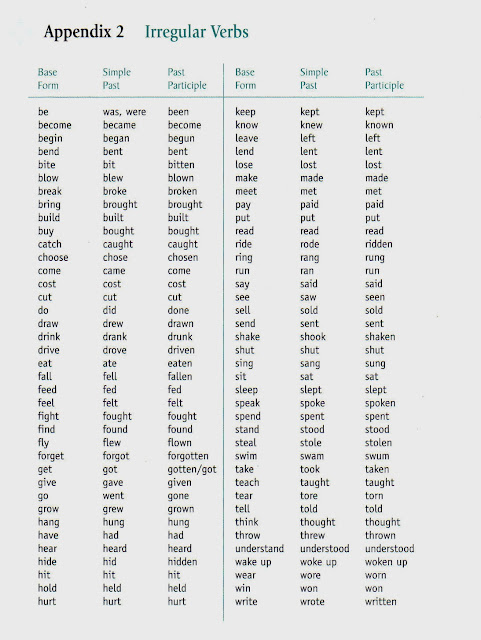 Etiquetas: auxiliary verbs, did, do, ed, SIMPLE PAST, tenses, was, were

DIAGRAM:
THE FUTURE: WILL & GOING TO 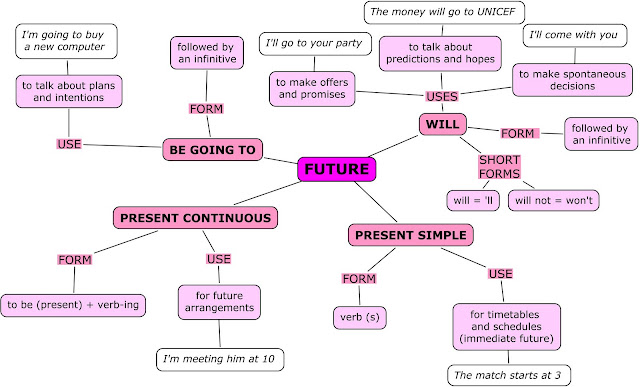 RULES: GOING TO VS WILL FUTURE

When to use GOING TO

The structure BE GOING TO is normally used to indicate the future but with some type of connection to the present. We use it in the following situations:
1. When we have already decided or we INTEND to do something in the future. (Prior Plan)
The decision has been made before the moment of speaking.
2. When there are definite signs that something is going to happen. (Evidence)
Something is likely to happen based on the evidence or experience you have.
3. When something is about to happen:

When to use WILL

In other cases, where there is no implicit or explicit connection to the present, use WILL:
1. For things that we decide to do now. (Rapid Decisions)
This is when you make a decision at that moment, in a spontaneous way.
2. When we think or believe something about the future. (Prediction)
Note: You can use both Will and Going to for making future predictions.
3. To make an offer, a promise or a threat.
4. You use WON'T when someone refuses to do something.

As you can see, both Will and Going to can be used for making future predictions without having a real difference in meaning.

Compare Will vs. Going To

If someone asks: "Are you busy this evening?"
If I respond: "Yes, I'm going to the movies." I use going to because it is a plan I made earlier (before I was asked the question). - In this case we cannot use Will.
If I haven't made plans, then you can say either: "I will probably watch TV." OR "I'm probably going to watch TV."
Both will and going to are possible in this situation because we are predicting what will happen (since we haven't made any plans).
Publicado por Paula en 16:00 No hay comentarios:

Etiquetas: be going to, future, PRESENT CONTINUOUS, present simple, simple future, WILL AND GOING TO

How to write a CV


The style and layout of a curriculum vitae (CV, resumé) in English are often different to those in other languages. These steps explain how to write a great CV in English.

Make notes on your work experience, both paid, unpaid, full-time and part-time. Write down your responsibilities, job title and company information. Include everything!

Make notes on your education. Include your degree or any certificates, names of major courses, school names and courses relevant to the job you are applying for.

This time make notes on other achievements. Include your membership of organizations, military service and any other special accomplishments.

From your notes, choose which skills are relevant (skills that are similar) to the job which you are applying for. These are the most important points for your CV.

Begin your CV. Write your full name, address, telephone number, email, date of birth, marital status and nationality at the top of the CV.

Write an objective. The objective is a short sentence describing the job you hope to get. This is common only in an American-style CV (called a resumé).

Summarize your education, including important facts (type of degree, specific courses you have studied) that are relevant to the job you are applying for.

List all your work experience, job by job. Start with the your most recent job and progress backwards in time. Again, focus on skills that are relevant. Include details of companies and your job title and responsibilities at that company.

Include other relevant information such as languages spoken, computer skills, etc.

Very briefly include your hobbies and main interests.

Finish with the line: References available upon request.

10 Ways To Be ProfessionalActing like a professional really means doing what it takes to make others think of you as reliable, respectful, and competent. Depending on where you work and the type of job you have, this can take on many different forms.There are, however, quite a few common traits when it comes to being professional. This includes the following:1. Competence. You’re good at what you do – and you have the skills and knowledge that enable you to do your job well.2. Reliability. People can depend on you to show up on time, submit your work when it’s supposed to be ready, etc.3. Honesty. You tell the truth and are upfront about where things stand.4. Integrity. You are known for your consistent principles.5. Respect For Others. Treating all people as if they mattered is part of your approach.6. Self-Upgrading. Rather than letting your skills or knowledge become outdated, you seek out ways of staying current.7. Being Positive. No one likes a constant pessimist. Having an upbeat attitude and trying to be a problem-solver makes a big difference.8. Supporting Others. You share the spotlight with colleagues, take time to show others how to do things properly, and lend an ear when necessary.9. Staying Work-Focused. Not letting your private life needlessly have an impact on your job, and not spending time at work attending to personal matters.10. Listening Carefully. People want to be heard, so you give people a chance to explain their ideas properly.

ANSWER THE QUESTIONS:
1) Do you agree with the article "10 ways to be professional"? why?
2) What others "skills" would you add?
3) Talk about your "strengths" and "weaknesses" in your job